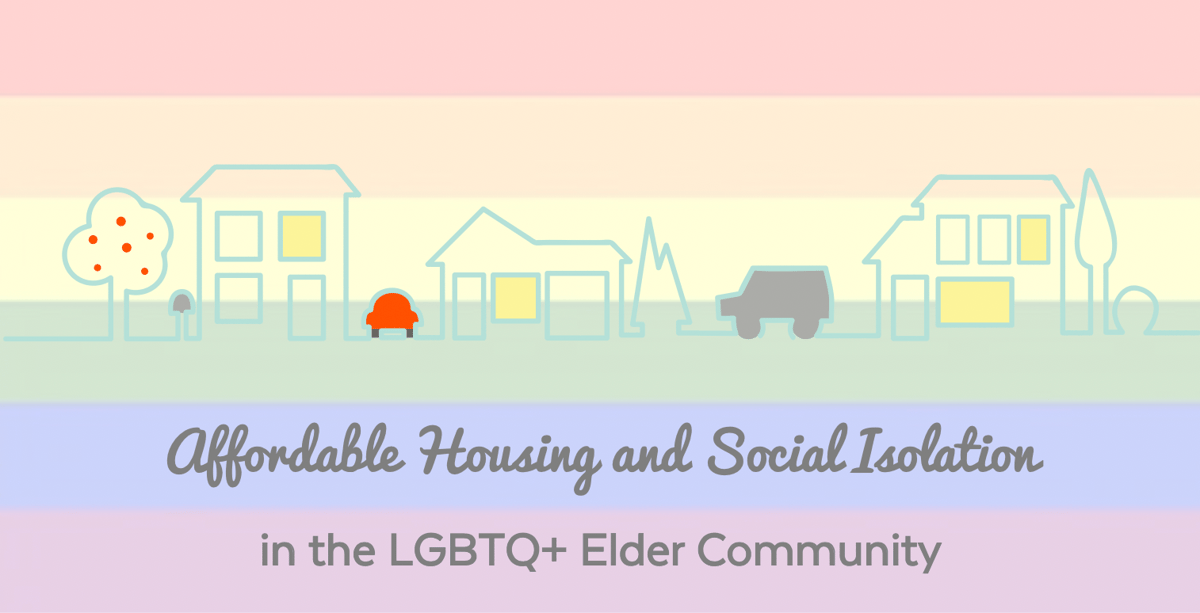 According to Out & Visible, a 2017 study from SAGE, the number of Lesbian, Gay, Bisexual and Transgender elders in America is growing rapidly. By 2030, there will be roughly 7 million LGBTQ+ adults over 50 nationwide, more than double the current estimate.

We all need a safe and affordable place to live, with friends and neighbors to share our lives. These are universal human concerns. However, the LGBTQ+ community faces unique housing issues and a greater risk of isolation and loneliness as they age.

Traditionally LGBT-friendly neighborhoods like the Castro San Francisco and the Village in New York have become increasingly gentrified, pricing out many of the LGBTQ+ people who made those neighborhoods desirable in the first place. At the same time, it’s difficult for many LGBTQ+ seniors to find affordable and inclusive senior housing.

According to the SAGE study, housing discrimination is a significant concern:

As we’ve reported before, prolonged loneliness and social isolation can be a genuine health hazard for anyone. And while all seniors face the risk of isolation, LGBT elders grapple with a unique set of circumstances that raise their risk.

SAGE reports that LGBTQ+ elders are twice as likely to be single and live alone as their heterosexual counterparts, and four times less likely to have children. LGBT elders may also lack other family support due to estrangement. Nearly 60% of those surveyed by SAGE reported feeling a lack of companionship. More than 50% said they feel isolated from others. And in a 2018 AARP study, 76% of older LGBTQ+ Americans said they were concerned about having adequate family and/or social supports to rely on as they age.

The time is right for these initiatives—the AARP survey found that 91% of LGBT people over 45 are interested in LGBT-welcoming housing development for older adults. These senior living communities will naturally support a sense of connectedness and fellowship that’s desperately needed.

That said, the need currently far outweighs the supply. The existing and planned developments can’t house everybody, and many LGBT elders live outside the medium-to-large cities where these programs are emerging.

Homesharing is another way to help fill that gap. In homesharing, a homeowner offers to rent an extra room (or rooms) in their home to a roommate. Homesharing offers an affordable housing solution to the roommate, generates helpful income for the homeowner and provides both parties with much-needed companionship. While each homesharing relationship is different, in many cases a close and supportive friendship develops over time.  What’s more, the benefits of homesharing companionship can be mental, emotional and even physical.

Where Can I Find More Information on LBGT Elder Housing Issues?

Human Rights Campaign has a great general resource on LGBT property ownership and discrimination issues. Financial services company Bankrate created this guide to recognizing and fighting housing discrimination. SAGE has a number of helpful articles around LGBT Elder Housing, LBGT rights in general, and a wealth of information on its new National LGBT Elder Housing Initiative.