Getting Real with Marie Osmond: Living Life on Her Terms 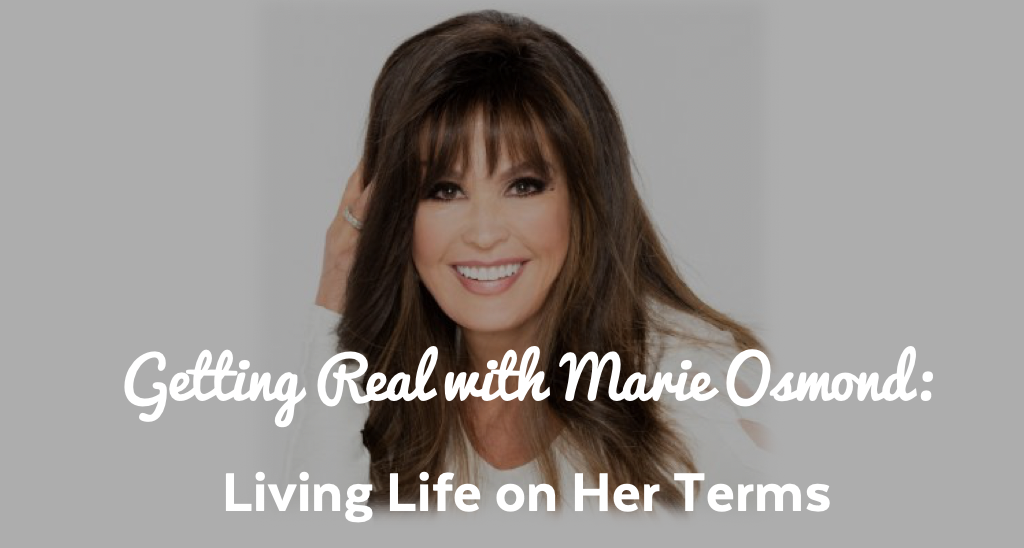 The first thing you notice when talking with Marie Osmond is her hearty, authentic and frequent laugh, which mirrors her philosophy: “If you are going to laugh about it later, you might as well laugh about it now.” That thread of optimism clearly weaves through every aspect of this multi-talented star’s professional and personal life—an especially happy life, now that she has grandchildren.

“It is the most incredible experience!” Marie said, laughing. “It is a wonderful extension of your child. When you’re a parent you have to be a disciplinarian; as a Grandma all I have to do is love them.”

“My husband and I love being grandparents,” she continued. “I’m reminded of being so loved by my grandparents. I wish my younger kids had known my grandparents. My mom and dad loved my children so much. Grandparents give perspective to children that they can’t get anywhere else. They have experience and such a library of wisdom.”

How it all began

The only daughter of nine children in the famous, singing Osmond Family, Marie made her debut at age three on The Andy Williams Show. At age twelve, she recorded “Paper Roses,” and became the youngest female artist to have a debut reach #1 on the charts, and be nominated for a Grammy. In 1976, she joined brother Donny to become the youngest host of a national TV variety show, The Donny & Marie Show.

“I had wonderful parents,” Marie explained, “They didn’t make my choices for me. They helped me realize the importance of choice and the consequences. Sure, there were times it was lonely, but how do you feel sorry for yourself? I’ve had an incredible life with wonderful people.”

Since her debut as a toddler, Marie’s life has played out in the public. She married her college boyfriend in 1982 and divorced three years later, when their son was still a toddler. She married her second husband in 1986 and had two more biological children and adopted five. That marriage, which Marie describes as “a bad marriage,” ended in 2007 after twenty-one years.

In her book Behind the Smile: My Journey Out of Postpartum Depression, Marie described motherhood as a calling. “I have eight kids [and] used to joke with my Mom, who had nine, that I’m a slacker! As the mother of adopted kids, I do feel it [being a mother] is a calling. It is something I wanted to do. I knew they were mine. We lovingly took on the responsibility.” But being a grandmother is different. “It’s a gift you receive. It’s more a privilege than a calling. Though I do know grandparents who are called to take on much more, depending on [what’s happening in] their kids’ lives.”

Sadly, Marie lost her son Michael in 2010 as a result of depression, followed by a suicide. In an interview with Oprah following Michael’s death, Marie said her son told her the day before his death that he was lonely and isolated—feelings she recalled from her own postpartum depression. “It was the first time I heard him start to cry and say he was alone,” she said. “That he had no friends. That he felt despair.”

Losing a child was devastating. “I’ve gone some tough times. But you know, everyone has. I see where God has strengthened me throughout my life. He does it a little bit at a time. I believe he lifts you and sees if you can carry it. And then he lets you be. Then, he’ll come back and strengthen you. And he sees how you are doing and helps you come at your problem from another angle. It’s a great eternal principle of growth: You just [have to] trust that he won’t give you anything you can’t handle.”

The Role of Optimism and Service

Marie credits her mother, Olive, with teaching her strength. “My mother was the most positive woman. She had great faith in God. Her family was all schoolteachers. She would say, ‘Marie, let’s just get simple. Faith is nothing more than a positive attitude. You must believe that good will come.’”

Marie uses this philosophy today. “The greatest way to get me out of my own funk is to turn around and serve other people-- I promise you, there is always someone struggling more than you are—and that lifts you up. It has a profound, positive effect in your life.” To serve other people, Marie has devoted thirty years to the Children’s Miracle Network Hospitals, helping them to raise some $5 billion.

Marie on Getting Fit and Healthy

Marie became a spokesperson for NutriSystem when she lost fifty pounds on the plan, over ten years ago. “I couldn’t walk up the stairs without huffing and puffing. You can’t breathe and run all over the stage with that weight. I [also] couldn’t be a grandmother, keep up with eight children—I still have a teen at home—or perform in Vegas with Donny, without losing the weight. I love the kind of energy I have in my life now.” But she also needed to be fit, and hates going to the gym. “I asked my athletic and very fit husband to find me something I could use at home, and we settled on the BodyGym,” (which she now promotes/sells on QVC). “I don’t lend my name to many things, but I like being involved with things that will help women. We all need each other.”

Though Marie’s career has kept her in the public spotlight, it hasn’t hampered her independent nature, her desire to serve others – especially children, or live her life on her own terms. She attributes this courage and conviction to her parents and her faith. Marie’s willingness to share freely both the pain and the happiness in her life continues to strike a chord with lifelong fans, and earn her new ones from a new generation.  At 57, she and her brother Donnie sell-out shows weekly in Las Vegas and are also still touring worldwide. Learn more at www.marieosmond.com.

Learn more about homesharing at Silvernest.com. Silvernest boldly breaks the rules of aging so you can share your home on your own terms. We’re creating the next generation of roommates. A more modern kind. A well-matched kind. A kind that’s just your style.

This post was written by Lori Bitter for Silvernest and GRAND Magazine.