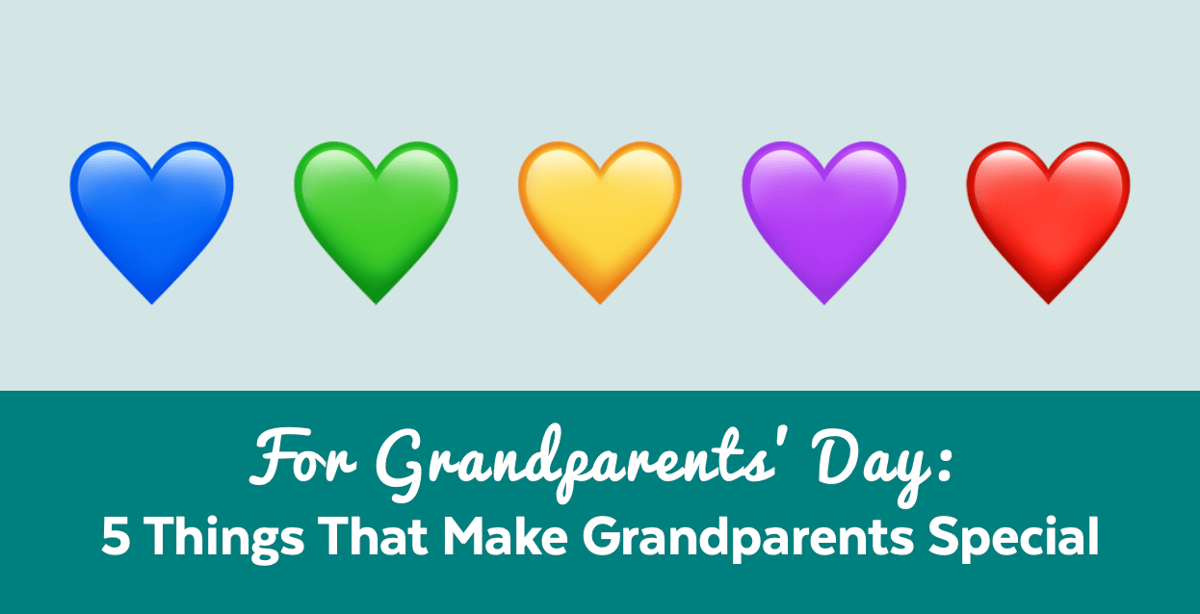 Who else gives us hugs when we’re down, cuddles us when we are sick, and sneaks us special treats and gifts when we call or visit? No one. The best thing about grandparents is that they always forgive us and always find an excuse for not-so-good behaviors. But, guess what? Grandparents also love “loving on their grandchildren.” In fact, they fare better both physically and emotionally, as they age, if they have a close relationship with their grandchildren.

Conversely, a recent study, published by the American Sociological Association, found that grandparents, who have a close bond with their grandchildren, are less likely to experience anxiety, loneliness, and/or depression. So, as you can see, grandparents are very important, which is why it is paramount to honor the beacons of love and wisdom on Grandparents Day. But…if you need a little more convincing as to why grandparents are so wonderfully important, well, listed below are five reasons we should honor our grandparents a little bit more.

1. They Make a Difference

We should honor the importance of grandparents in children’s lives because they make a huge difference in our lives – both when we’re young and when we’re older. Today, with “Baby Boomers” living longer, most grandchildren and even some great-grandchildren are getting to reap the benefits of having that person (or two), who is always in their corner. In fact, nowadays, more than half of grandparents get to spend face-to-face quality time with their grandchildren once or twice a week. And, to top that off, approximately 90% of grandparents report getting to feed and change their infant grandchild’s diaper on a regular basis!

And, as a result, of this special time spent together, both grandparents and grandchildren report feeling happier and more satisfied in life. Another reason we should recognize the importance of grandparents in children’s lives is because they are the bearers of family history, culture, and traditions. What grandparent doesn’t know everything about the family’s past? None.

And, according to recent research studies, approximately 90% of adult grandchildren credit their grandparents for shaping their beliefs, values, morals, attitude, and behaviors. Lastly, grandparents are so important because they impart really good advice, based on real experiences.

2. They Raise Their Grandchildren

3. They Are Real-Life Yodas

Although many do not fully understand the value of grandparents, the truth is these real-life Yodas are invaluable. For instance, who could provide better guidance, advice, and suggestions, when it comes to child-rearing practices and life challenges? No one – except grandparents. Our grandparents have probably experienced just about anything and everything there is, while emerging victorious. Therefore, one of the best reasons to celebrate Grandparents Day is because grandparents share their wisdom and knowledge with us, so we won’t make the same mistakes they did.

4. They Give Back to Their Communities

How can anyone truly doubt the value of grandparents? I mean, grandparents are usually very generous – to you and to others. They have tremendously big hearts that they are willing to use to give back to their communities. More specifically, older generations, especially grandparents, tend to be very generous with their heart, time, and even money. In fact, according to the American Grandparents Association, grandparents not only give lots of money to non-profit organizations, they also volunteer much of their time to homeless shelters, whenever possible.

5. They are Lively and Engaged

Lastly, the value of grandparents should be celebrated on Grandparents Day because today’s seniors aren’t the type to sit alone in a dark room, rocking in a rocker, watching soap operas all day, while reminiscing about “how things used to be.” Nope, these grandparents are lively and engaged. In fact, many seniors report exercising, dancing, or even playing non-aggressive sports like tennis and/or golf. Some even admit having sex – occasionally or on a regular basis.

This article originally appeared on GRANDmagazine.com. Celebrate Grandparents Day with a FREE subscription to GRAND - The Lifestyle Magazine for Today's Grandparents! Go to www.grandsub.com today!