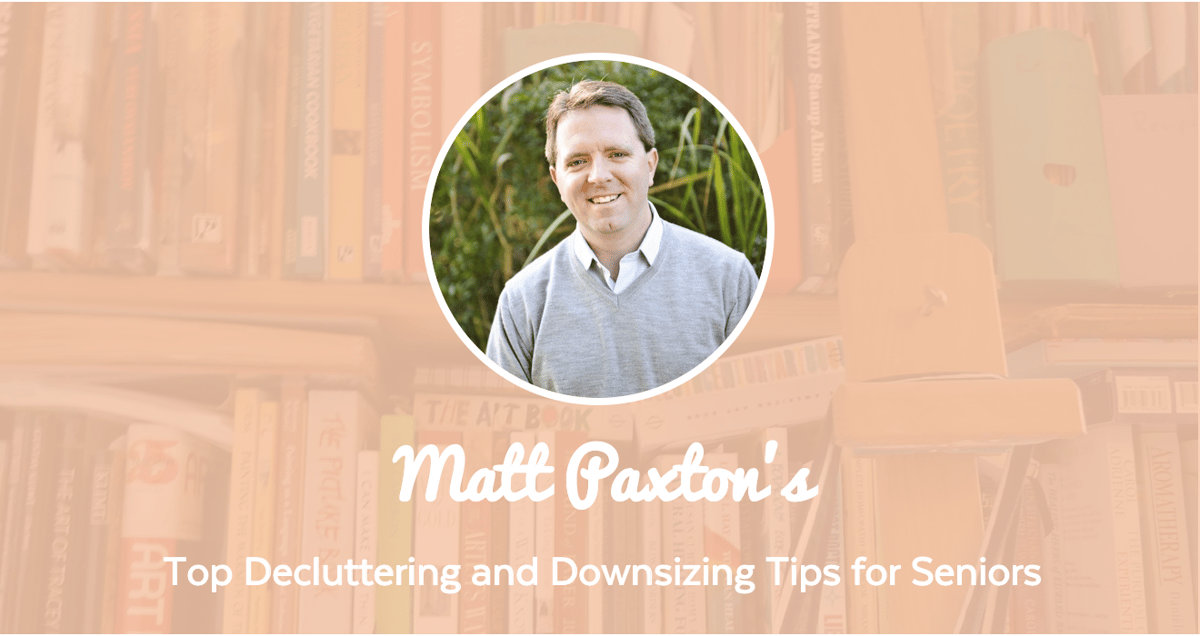 Matt Paxton is one of the country’s top extreme cleaning experts—you might know his name if you were a fan of the popular A&E TV show Hoarders.


Matt is especially passionate about helping older adults declutter and downsize. His expertise and deep compassion stem from the year Matt lost his father, stepfather and both grandfathers. Matt was called upon to help his mother with their possessions. As Matt says, “We had four houses to deal with! I had to figure it out, and I’m still doing it 18 years later.”


As a guest on Silvernest’s Share Your Story podcast, Matt offered a huge insight that transformed how we think about decluttering and downsizing.


It’s Not the Stuff, It’s the Stories.

We hang onto many possessions because of the memories attached to them, Matt says, “It’s not the sofa. It’s grandma sitting on that sofa and 35 Christmases on that sofa.” But, he warns, “If you don’t get the stories out, you won’t get the stuff out and your life doesn’t move forward.”


Keep in mind, this story idea also applies to everyday items you’re not using. For example, you might hang onto expensive shoes that don’t fit because of a story in your mind that says, “It’s bad to get rid of something I spent a lot of money on. And someday I might wear them.” The truth is, you’re not going to wear shoes that hurt your feet. You might also have a story that says “I’m a thrifty person,” and that’s why you hang onto all those little packets of ketchup from the drive-through. Questioning the stories around the clutter can help you see where you’re giving something more meaning and power than it’s worth.


3 Steps to Make Decluttering and Downsizing a Little Easier

Whether you use voice or video recording or simply write things down, the first step is to tell the stories attached to your possessions. Use whatever works best for you, and keep it simple. Just get started, even if it’s only ten minutes at a time.

If you just stash the stories in a box or file folder somewhere, you may still feel stuck and unable to let go. Make them easily accessible and shareable. Let’s say you have a large collection of travel souvenirs. Take high-quality photos of everything and make one scrapbook, with stories written alongside the pictures. Now you’ve traded some dusty old boxes in your garage for a small-ish scrapbook you can keep on your coffee table and enjoy any time you like. Like Matt says, “If you’re not showing it, you’re not sharing it.”

As for family photos, Matt has a really beautiful and practical suggestion: Make bags containing 20 pictures and your personal stories about each one. Give one to each grandchild and you’ve passed along a family treasure in a compact, yet personal way.

Whether you decide to give things to friends and family, donate them to a local charity or sell them in a yard sale or consignment store, move them out of your house as quickly as possible—within 24 hours of deciding to let go of them, ideally. This gives you instant results in the form of reduced clutter and more space, as well as the feeling of accomplishment and lightness that goes along with it. Those positive feelings might even become addictive!


And remember, as Matt says, “You’re not emptying the jar. You’re just creating space to fill the jar with new stories again.”