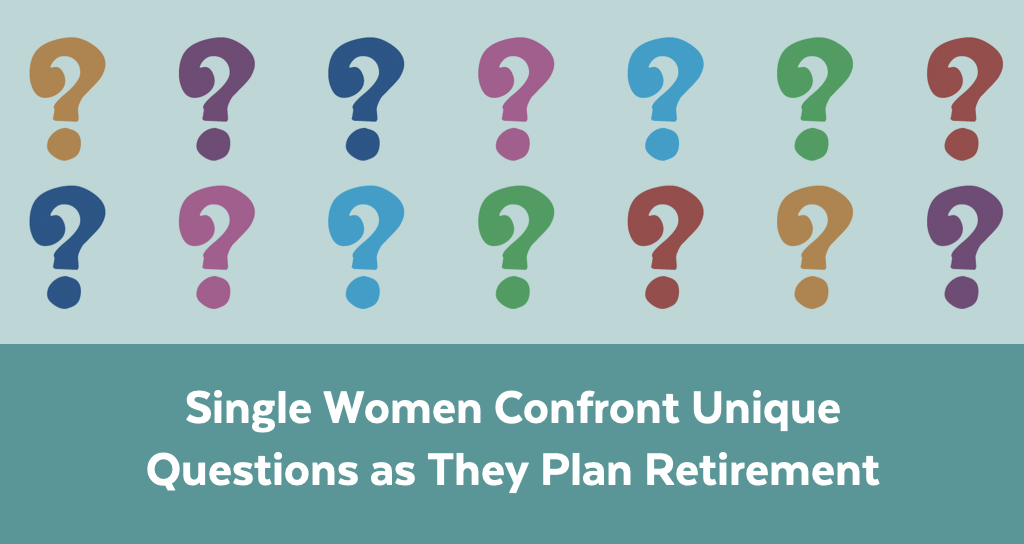 In many ways, single women face the same problems as men when they consider how to retire with enough income, with one exception: They worry more.

How Women Are Getting Ready for Retirement

Women in general are more likely than men to put money into their workplace retirement account and one third of women, according to a survey, said their savings plans are “on track.” But eight in ten women have concerns about saving enough for retirement, with 54% saying they are “very concerned.”

Their worry is not misplaced. For one thing, it’s more difficult for a single person to save than it is for a couple. And when one member of a two-earner couple loses a job or gets sick it presents difficulties—but it’s not as scary as when you are the sole earner in a household.

In addition, women often take time out of the workplace to raise children or care for parents and their income on average is lower than a man’s in the same job. Yet women live longer, with the Society of Actuaries reporting that the average 65-year-old woman can expect to reach the age of 88.2, nearly two years older than a man. All those factors can make it more difficult for women, particularly single women, to build enough savings to provide the income they want and need through their lifetimes.

If that sounds like you, consider this simple and safe approach I’ve been writing about for years:

When you take some of the money you have saved and invest in an income annuity, you will guarantee income for yourself for the rest of your life. You won’t have to worry about whether that income will run out if the stock market dives or calculate how much you will have to spend from your savings each year. You can count on a retirement paycheck that stays the same year-in and year-out, as opposed to being dependent on withdrawals from your retirement savings account that is tied to market returns and other factors.

Here is a real example of how an income annuity could help you prepare. One of our friends is a teacher who makes a good income and has done a good job of saving. She has been divorced for over 15 years, and has a daughter who recently married. The daughter is not expecting a big inheritance from her Mom because she knows her mother needs her savings to support her lifestyle in retirement. Our friend worked out a plan with an advisor who told her she can expect her money to last until she is 90 years old.

But what happens if the economy doesn’t perform as projected? Or she gets sick and incurs large expenses? What will she do if she lives past 90? The answer in each instance is that she will have to spend less than she has planned to. In other words, our friend will have to make decisions—and continue to worry—based on events largely out of her control.

By investing some of her savings in an income annuity, which she would buy from a top-rated insurance company, our friend can guarantee a source of income that will not vary and will last for the rest of her life. The income would be deposited in her bank account every month, just like a retirement paycheck. Having a simple and secure source of income means she can be independent longer and she will likely free up money to pay for unexpected expenses, which will be a comfort to her daughter, too.